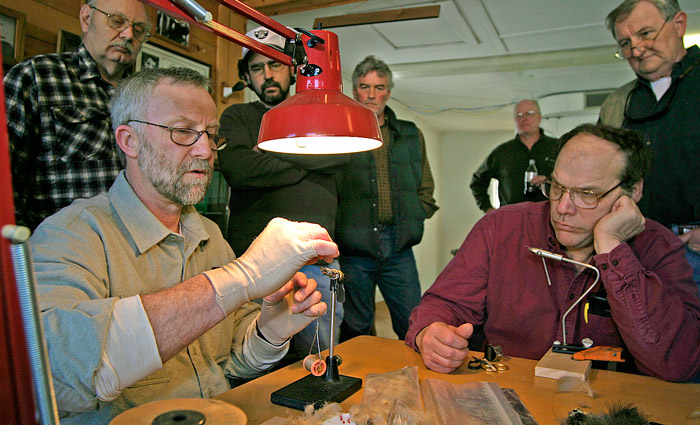 According to the Catskill Fly Tyers Guild, the definition of a Catskill fly is “…any pattern known to have originated roughly within the Catskills and to have been designed largely for use there.” This would include the famous “Catskill style” floating flies created by the region's legendary fly tyers, as well as the continually emerging dressings of contemporary Catskill fly tyers.

The tyers who contributed to this project are acknowledged to be among the best at the arcane craft of tying fishing flies in the “Catskill Tradition. ” They represent a small group of the talented tyers who fish our Catskill waters. 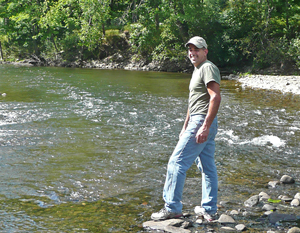 “Catskill John” Bonasera has been tying and fly fishing since 2002. He owns a summer house in Jeffersonville NY, a stones' throw from Callicoon Creek He's a student of Catskill fly fishing and tying history, and is active with the Catskill Fly Fishing Center and Museum. See John's Blue Quill. 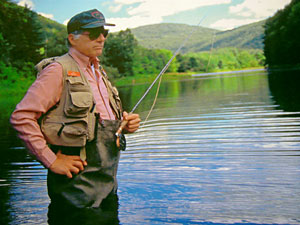 Tony Bonavist received a BS in Aquatic Biology from the University of Montana, in 1965, then went on to work as a fisheries biologist for the New York State Department of Environmental Conservation for 26 years. Over the years, he taught fly fishing at the Wulff School of Fly Fishing and the Frost Valley YMCA. Tony has published in Trout Magazine, Fly Fisherman and Gray's Sporting Journal. He began tying flies, using a saw sharpening vise and feathers from the hen house when he was ten. He lives in Hurley, New York. See Tony's Hendrickson. 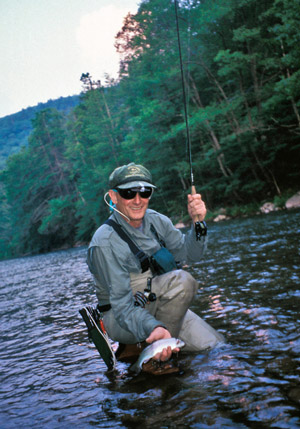 Tony has been fly fishing and fly-tying in New Jersey, Massachusetts, Connecticut, Montana and New York for over 40 years. For the last 16 years he and his wife, Sue, have lived in Boiceville, about a mile from his beloved Esopus Creek and its wild rainbows. He is now retired, and when he is not tying flies or fishing the Esopus or a stream in the Esopus watershed, he is an active member of his church and the Ashokan/Pepacton Watershed Chapter of Trout Unlimited. See Tony's Spun Dun. 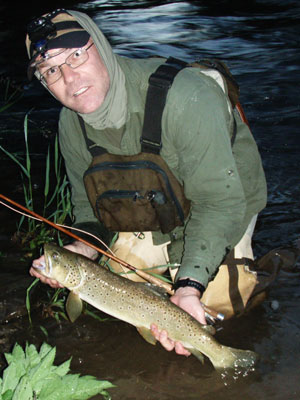 Tim Didas is an avid fly tyer and fly fisherman from Hornell, New York. Tim retired from the United States Marine Corps, with the rank of Sergeant Major, after serving on active duty for more than 30 years. He currently serves as the president of the Conhocton Valley Chapter of Trout Unlimited, and is the Program Lead for Project Healing Waters Fly Fishing at the Bath, New York Veteran's Administration hospital. He is also a member of the Catskill Fly Tyers Guild and the Catskill Fly Fishing Center and Museum. See Tim's Stonefly Creeper. 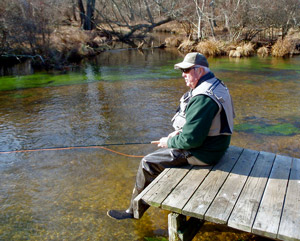 The late Aaron Hirschhorn was a retired school teacher living in the New York metropolitan area. He considered the Catskills his home waters and, except for a few trips to Montana and Pennsylvania, that's where he did his fishing. He fished Catskill waters for 50+ years—exclusively for trout. Aside from fly fishing, he tied flies for almost 40 years, tying mostly for himself, but also for raffles, and the occasional swap. “Though I'm in the twilight of my years,” wrote Aaron, “the passion to fish and tie flies still beats strong.” (Aaron passed away in March, 2013, shortly after he tied the Royal Trude for this project. 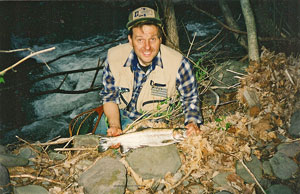 Lance Hoffman, PhD., a veteran of the Army, Navy and Air Force, is a retired Civil Environmental Engineer who has worked in various parts of the world promoting Environmental and Alternative Energy concerns. The trout pictured was caught in the tiny Vandervoort Bushkill (a.k.a. Fox Hollow Creek) on a wet fly. Lance likes to tie flies for relaxation and most important, ones that will catch fish. He tied a "Black Turkey" fly for this project, an original pattern developed by his late father Ralph Hoffman. See Lance's Green Wisp and Black Turkey. 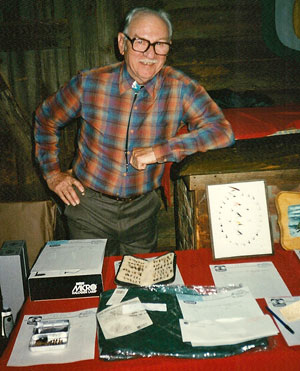 The late Ralph Hoffman was a legendary Catskill fly fisherman and expert fly tyer. Ralph was a sportsman's guide for many years, and expert in all aspects of outdoor skills and tactics. He enjoyed demonstrating his many years of experience and knowledge of fly tying. His original pattern for the "Black Turkey" fly is a real trout slayer.

Ralph was a retired Navy Flight Senior Chief who served in combat during WWII. His combat aircraft was shot down and he was wounded in action more than once. Ralph received several commendations for his heroics. Ralph continued to serve in the reserves through the Vietnam War and all other subsequent conflicts. See Ralph's Black Bear Streamer. 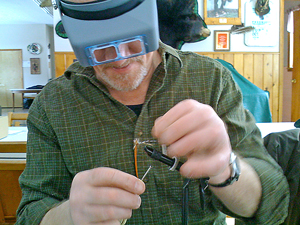 Growing up in Illinois, Mark cut his angling teeth fishing the bass ponds of the Midwest, and hooking an occasional catfish in the Mississippi River. After graduating from college, he moved to New York, where Mark discovered the fly rod, and his angling passion took on a new dimension. He has fished all over the USA, but his biggest challenge remains just outside his front door — the Stony Clove Creek.

Mark makes his home and business in the Catskill Mountains, an aggressive double-haul from the Esopus Creek. In Mark's other life, he is a professional photographer of thirty years. Mark photographed the artificial flies you see in this web site. See Mark's Prince Nymph. 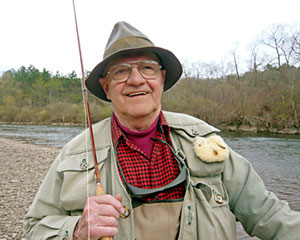 The late Roger Menard authored My Side of the River: Reflections of a Catskill Fly Fisherman. He was a Charter Director of the Theodore Gordon Flyfishers and a member of Trout Unlimited as well as the Catskill Flyfishers Guild. A conservationist and avid fly angler, he fished with his wife Lisa in the Northeast and also in the eastern Canadian Provinces for Atlantic salmon and brook trout. His travels included the trout waters of Idaho, Wyoming, and Montana. As a renowned fly tyer, he sat alongside the vises of his friends Harry and Elie Darbee, Keith Fulsher, Herb Howard, Matt Vinceguerra, and Ray Smith. Roger was a retired sales representative for a major food corporation and served honorably in the United States navy. Sadly, Roger passed away during the summer of 2018 and is much missed. See Roger's Red Quill and Ginger Quill. 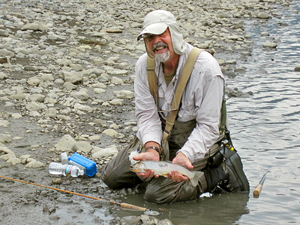 At age nine Ed Ostapczuk received his first fishing pole, at age thirteen he obtained a fly tying kit as a Christmas present and has been busy doing both ever since. Ed and his wife Lois moved to the Catskills in 1970, drawn to the region by the Esopus Creek, which he has been fishing from that time forward. He is a retired middle school teacher and licensed NYS fishing guide.

In 1991, Trophy Trout Streams of the Northeast was published and included a chapter on the Esopus written by Ostapczuk. In 2012, he wrote Ramblings of a Charmed Circle Flyfisher, recounting his fly-fishing adventures.

Ostapczuk joined Trout Unlimited in 1969 and has been a member ever since. He also belongs to several other conservation and fly-fishing organizations including the Catskill Fly Tyers Guild. He still resides in the Catskills with his wife Lois. See Ed's Claret Gnat and Lime Trude. 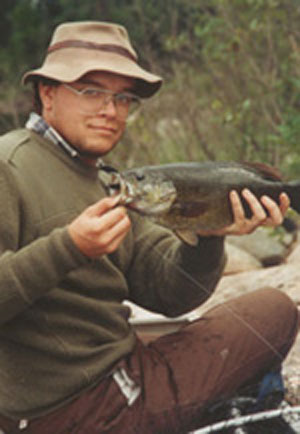 Bob Petti is a fly fisherman and fly tyer native to the Catskill Mountains. Like so many other fly tyers, he started his journey innocently. "All I wanted was the ability to tie the Royal Wulff, Elk Hair Caddis, Adams, and Gold Ribbed Hare's Ear." A couple decades later, his one-shoe-box hobby has grown to a full blown identity. “I consider myself a fly tyer more so than a fly fisher.” His favorite flies to tie are wet flies and streamers, particularly the classic dressings.

Bob was invited to join The Global Flyfisher as a partner in the winter of 1999-2000 and has authored nearly a hundred articles in the past dozen years on GFF and other sites. His flies have been featured in books by John Shewey and Paul Marriner. See Bob's Mickey Finn. 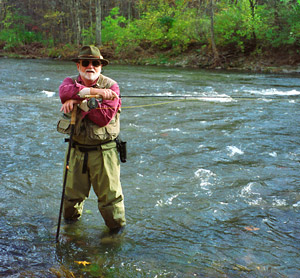 Hank Rope owns and operates Big Indian Guide Service, located on the banks of the Esopus Creek and Lost Clove. Being on the Creek daily has given him intimate knowledge of stream life. Hank is interested mainly in tying and fishing Catskill style flies, which he learned from the masters as president of the Catskill Fly Tyers Guild.Hank passes on his knowledge through fly tying classes held every winter at the Jerry Bartlett Angling Collection. See Hank's Griffith's Gnat. 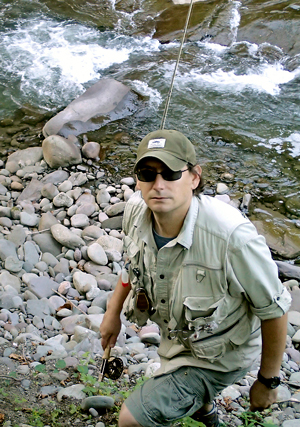 A lifelong fisherman, Todd moved to the Catskills in 2008 and has since devoted the rest of his life exclusively to the art of fly fishing. He has been a board member of the Ashokan-Pepacton Chapter of Trout Unlimited since 2009 serving as secretary for several years. His photography was recently featured in Eastern Fly Fishing magazine's spring 2013 article about the Esopus Creek. In 2012, he wrote a column for the Poughkeepsie Journal entitled "Healthy Rivers" about issues surrounding post Hurricane Irene clean-up and the future of protecting cold water trout fisheries. The turbidity that followed Irene inspired the design of his fly the New American, a modernized hybrid of the American Pheasant Tail with Gordon Hill's Nymphomaniac. You can also view his tie of the Henryville Special.

Joe David was born in Elizabeth, New Jersey in 1949 and grew up fishing the Catskills. His favorite river is the Esopus. Now he resides in Silver Spring, Maryland, and his home waters are the Savage River and North Branch of the Potomac, in Western Virginia. See Joe's Blue Wing Olive.

Well-chosen hackle on a dry fly, if it has been selected with the view of suggesting to the trout the shade of coloring as well as the translucency of the natural fly's wings in motion, is probably the high point In the killing quality of any dry-fly.
Preston Jennings
A Book of Trout Flies, 1935