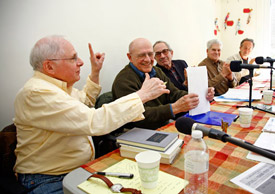 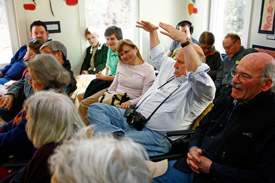 Panelists and audience during the 2016 Fly Fishing Forum Series.

The Esopus Valley’s most famous outdoorsman, Ray Smith (1900–1975), is undeniably the quintessential sporting legend of the Catskills. An accomplished fly fisherman and casting expert, Ray was also a prolific fly tyer. A sought-after fishing guide, his clients included numerous celebrities of the day. Jody Hoyt, Paul Hoyt and Preston Woolheater, all accomplished fishermen and fly tyers in their own right, initially learned their craft from Ray Smith at age 10 to 13. In these two episodes of "Ray Smith: The Legend Lives On," Jody, Paul and Preston share their remembrances with us.

Theodore Gordon (1854–1915) is known for his work adapting British materials and techniques for the dry fly to the rougher, tumbling waters of the Catskill region. He was a pivotal figure in the growth and popularity of dry fly fishing in America, and the development of the “Catskill Style” of fly tying. Gordon’s iconic dry fly— the Quill Gordon — still endures today as one of anglers’ most popular patterns. This talk on one of the most important figures in Catskills fly fishing history was presented by Bert Darrow, President of the Theodore Gordon Flyfishers, Inc, past President of the Catskill Fly Fishing Center and Museum, permanent Director and past President of the Catskill Mountain Trout Unlimited, licensed fishing guide and author.

Outdoor Guides of the Catskills: The “Adventure Experts”

Since the early 1800’s, New York’s guides have been leading visitors into the wild areas of our beautiful state. Back in the day, colorful characacters like Orson “Old Mountain” Phelps and other local outdoorsmen plied their trade as fishing and hunting guides to the wealthy robber barons of the Adirondack Great Camps. By 1924, New York required guides to be licensed, in an effort to reduce fires, enforce conservation laws, curb hunting abuses and enhance enjoyment of the outdoors. Today, the tradition continues, and licensed guides are available for outdoor adventure opportunities like whitewater, rock climbing, snowshoeing and nature studies, in addition to fishing and hunting.

On May 11, four local "Adventure Experts" got together to tell us about the history of guiding, what it takes to be a guide, how to choose one and how to get licensed. And we heard about some interesting personal experiences too!

Get the Outdoor Guides of the Catskills transcript

Once again, the house was packed, as “First Lady” Joan Wulff and her associate Jen Grossman took the floor to tell the story of her remarkable life and career in the angling world. Hooked on fishing at a very early age, she rose to prominence as a National Casting Champion, winning competitions for both distance (161 feet!) and accuracy from 1943-1960. In the late 1970s, she and her husband, Lee Wulff, opened the Wulff School of Fly Fishing in Lew Beach on the Upper Beaverkill.Joan is widely known for her pioneering set of fly casting mechanics, presented in her book “Fly Casting Techniques” and instructional video, “Dynamics of Fly Casting.” She has authored two other books on casting and one on fishing from a woman’s perspective, and she penned a column for Fly Rod & Reel Magazine about casting for 22 years. In 2007, she was elected to the International Game Fish Association Hall of Fame. As an author, mentor, teacher and legend, Joan's contribution to fly fishing is truly awe-inspiring, and we were thrilled to help celebrate her many accomplishments.

Get the Joan Wulff transcript

We had a full house on April 28, as author Austin 'Mac' Francis and Bethia Waterman discussed the history and origins of sporting clubs and preserves, both public and private, in the Catskills. By the late nineteenth century, overfishing, pollution and deforestation had devastated Catskill streams. In response, groups of sportsmen founded organizations like Phoenicia Fish and Game to protect streams and forest lands. Some became advocates and activists for environmental conservation, achieving landmark reforms and protections. Stay tuned as we post photos and a link to the event podcast in the coming weeks.

Austin McK. Francis is owner and publisher of The Beaverkill Press, a small literary press specializing in sporting and outdoors books. He is the author of Land of Little Rivers and Catskill Rivers, Birthplace of American Flyfishing. Bethia Waterman is one of the founders of the Jerry Bartlett Angling Collection and a resident of the Town of Shandaken.

Get the Sporting Clubs transcript

Nick Lyons, a titan in the field of books about fishing, joined us on December 2 for a memorable talk about his life and work. Before a full house, Nick reminisced about a lifetime of fishing, told some of his favorite stories, and answered questions. His generous donation of many of his books, which he signed for attendees, helped raise funds for the collection. Thank you, Nick! Listen to the podcast of the event or download the transcript, below.


Get the Nick Lyons transcript


Catching of Old Bess and the History of Rainbow Lodge 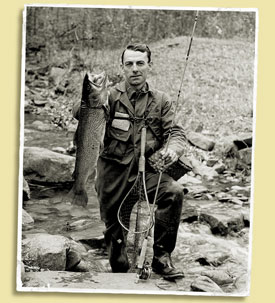 The family of Larry Decker entertained a full house with the epic story of the 1955 capture of the elusive and wily trout, "Old Bess," and Ed Kahil shared his scrapbook and memories from his family's legendary lodge for fishermen. Enjoy Larry Decker memorabilia and rare historic photos of the Rainbow Lodge in its heyday,listen to the podcasts of the event or download the transcripts, below.


Get the Old Bess transcript

Get the Rainbow Lodge transcript

In commemoration of our 20th Anniversary, the Jerry Bartlett Collection hosted a four-part series of lively discussions about the history of fishing in the Catskills. All the events were held in the community meeting room in the Phoenicia Library, on Main Street, Phoenicia.

July 23, 2016: “On the River with Authors, Guides and Catskill Characters.” Moderated by local historian Bill Birns, local authors and fishing guides shared their stories about fishing legends Ralph Hoffman, Paul O'Neil and Ray Smith, and their own experiences from a lifetime of fishing on the river. You can listen to the podcast of the event or download the transcript, below.

May 14, 2016: “Fishy Tales.” Active and retired DEC folks took us along on a wide ranging discussion of topics like their major battles, Catskill Bill Kelly, fishery management crises and public fishing rights. Moderated by Outdoor Writer Judy Van Put, the panel featured ﻿Jack Isaacs, Walt Keller, Mike Gann and Ed Van Put. You can listen to the podcast or download the transcript, below.


April 16, 2016: “Art Flick, Author, Fly Tyer and Conservationist.” Panelists Judd Weisberg, Wendy Neefus, Tony Bonavist, John Hoeko, Dave Brandt and Bert Darrow shared personal anecdotes and reminiscences about Art Flick, and discussed the impact of his essential Streamside Guide to Naturals and Their Imitations, as well as his important conservation efforts on the Schoharie. You can listen to the podcast or download the transcript, below.


March 19, 2016: “Frank Mele, the Fisherman, Author and Activist.” Moderated by local historian Bill Birns, the panel discussed Frank's life and writings, and his contribution to the organization Catskill Waters and its campaign for increased water releases into the Catskill system in the 1970s. The panel included Frank's son, Andy Mele, as well as John Hoeko, Roger Menard and Tony Bonavist. You can listen to the podcast or download the transcript, below.

Again and again I have heard hard-bitten disciples of the fly rod express their sorrow that they failed too long in partaking of the thrills and pleasures of this alluring sport, so make up your mind not to postpone the happy day.
J.R. Harris, An Angler's Entomology, 1952.