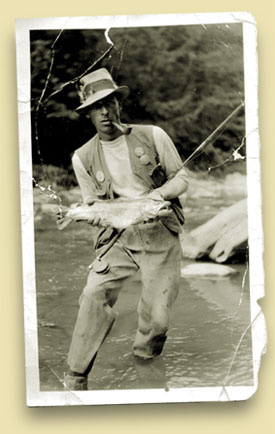 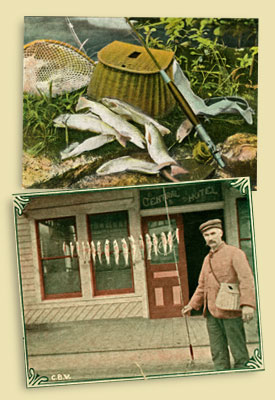 The stage was set for the modern Esopus Creek fly fisherman 10 to 12 thousand years ago, with the melting of the glaciers in the last ice age. As the mile thick ice sheet melted and receded from its southern-most reaches in the Esopus and Schoharie valleys, the rushing ice-melt carved the cloves and valleys of the Catskill Mountain range into ideal habitat for the propagation of Salvelinas fontinalis — our beloved heritage brook trout.

Although the greater Hudson Valley was settled by the Dutch as early as 1624, few Europeans ventured beyond into the deep Hemlock forests and rugged terrain of the Catskill Mountains. The intrepid explorers of the early 1800's were amazed and delighted to find the brook trout in such abundance in Catskill streams they could be caught by the basketful — an easy prey for the astute angler willing to endure the rigors of mountain travel at that time. The newly famous "Hudson River School" of painters, such as Frederic Church and Asher Durand, took to packing fishing rods on their excursions into the picturesque and wild Catskills. The first fishing resort in America, the Milo Barber boarding house, was located on the banks of the Stony Clove Creek, where the Phoenicia Elementary School currently stands. By 1824, a boarding and guide service was being advertised, and, in the early days, the angler's harvest often numbered in the hundreds of brook trout for a morning's work.

The Industrialization of the Catskills

But the Catskill forest was not immune to socio-economic forces percolating beyond the wilderness. In the early years of the industrial age, enterprising entrepreneurs stripped the bark from the towering hemlock trees that dominated the slopes of the Catskill Mountains for use in the leather tanning industry. From around 1820 until after the American Civil War, leather tanning was the predominant industry in the area, providing most of the leather goods consumed by the Union Army. Harvesting the bark killed the trees, leaving a blight of denuded forest slopes creeping over the Catskill Mountain Range. The demand for Catskill bluestone to pave the sidewalks of a rapidly growing New York City added another impetus to the industrialization of the Catskills. The wood acid industry followed. By the end of the Civil War, the vast hemlock forests were gone, and Catskill creeks were silted by the runoff of bare mountain slopes, poisoned by the effluvium of the tanning mills, and fished out by greedy "sports." The remaining brook trout were in retreat into the uppermost headwaters, and it appeared as if the Catskills harbored a dead fishery.

Resurgence of the Fishery

As industry marched on, so had science. Several attempts had been made after the Civil War to import the eggs of Salmo trutta — the "German" brown trout — into America. This was successfully done in 1884, and within a few years, New York State Fisheries Commissioner Seth Green had developed the methodology for rearing adult brown trout from eggs in a captive hatchery, with the intent of releasing them into the rivers of New York, in the hopes of reviving and enhancing the state's trout fisheries. At the same time, the Catskill forest had begun to regenerate itself, as second and third growth trees began to take hold. The "California mountain" trout, now referred to as rainbow trout, were the first to be stocked in the Esopus system, in June of 1883, in the Woodland Valley and Oxclove tributaries. The rainbow fry were received and transplanted by Leumiel Chichester, founder of the hamlet of Chichester. The "German" brown trout soon followed, with a stocking of 2,000 fry into the Esopus on April 19, 1888. Within a few years, the Catskill Mountains began to regain their former reputation as a bucolic haven for sports fishermen.

The resurrected charms of the Catskill Mountains did not go unnoticed by the Robber Baron class of the last half of the 19th Century. Beginning in the 1870's, wealthy families of the American Northeast began aggressively acquiring land and fishing reaches along the best streams and rivers. The headwaters of the Esopus Creek, for example, originate in the lake on the property of the Winnisook Club, founded as a private retreat in 1887. Winnisook's first club president, Judge Alton Brooks Parker, was the 1904 Democtatic Party nominee for president. He lost the election to Teddy Roosevelt. The proliferation of private fishing clubs in the Catskill Mountains on formerly "public" water was kept apace by the proliferation of the stereotypical Catskill poacher. The Winnisook, and many other private fishing clubs and retreats elsewhere in the Catskills, still exist as operating clubs today. 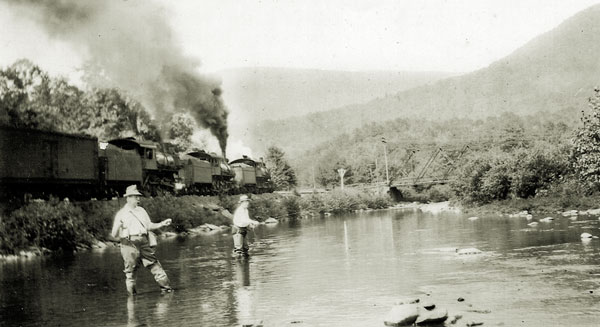 The penetration of the railroads into the inner reaches of the Catskill Mountains brought more changes. The predecessor of the Ulster and Delaware Railroad completed their line from Kingston to Phoenicia in 1866, and the U&DRR extended the line to Pine Hill by 1875. Now, people of more modest means could escape the urban life by boarding a steam ship in New York, steam up the Hudson River to Kingston, and board a train to the Catskill Mountains' many hotels and boarding houses. This new access brought the flourishing trout population to the notice of a larger segment of the sporting public. A growing sporting press fanned the flames of angler passion in venues like Forest and Stream Magazine, and glorified the romance of fishing with a fly. The law passed by the New York State Legislature in 1904 designating the Catskill Forest "Forever Wild" secured the future of the area as a wilderness and vacation destination.

The Birth of the "Catskill Style"

Even as the "German Browns" revived an ailing fishery, the natural reclusiveness and wariness of this new species meant that fish could no longer be caught by the basketful with little effort. Catskill anglers would need to recalibrate their methods accordingly. In 1890, sporting magazine columnist Theodore Gordon wrote to the renowned English fly fishing author, Fredrick Halford, complaining of the selective nature of the brown trout's feeding habits, and soliciting suggestions on fly selection for Gordon's Catskill waters. Halford sent back a cache of flies that were productive on the placid English chalk streams of Kent (on display at the Catskill Fly Fishing Museum, in Livingston Manor, NY today). They weren't quite right. Gordon recognized that, although the insects his English friends were imitating were similar in size and appearance to local hatches, the actual species differed, and the typical riverine habitat in the Catskills was steeper and more tumbling. He tweaked the design of Halford's flies to created the high-floating Quill Gordon dry fly, the first of the iconic "Catskill style" of dry fly. Popular flies of this style, like the Hendrickson and the Adams, quickly proliferated and brought a uniquely American perspective to the sport. These "Catskill Ties" have since demonstrated their effectiveness worldwide. 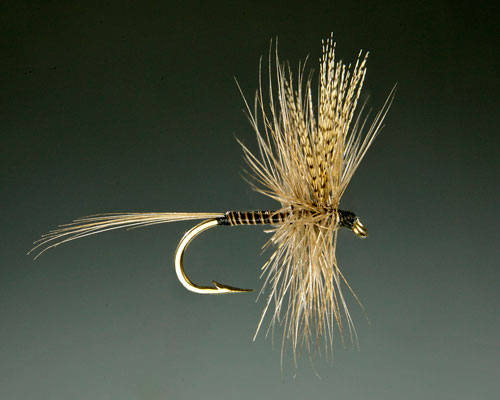 Throughout the first half of the 20th Century, advances in angling techniques, fishing tackle, stocking practices, and travel accommodations led to a flowering of the Catskill angling tradition. A growing media industry made stars of the best Esopus hands, like fishing guides Ray Smith and Jerry Bartlett, and angling authors Preston Jennings, Ernest Schweibert, Ray Bergman and Art Flick. Fly tying legends like the Dette and Darby families attracted acolytes from all corners of the angling community.

The demands of a rapidly growing 20th century metropolis led New York City to impound the Esopus Creek at midpoint to form the Ashokan Reservoir and build an underground tunnel to shunt water to the city, a project completed in 1912. The 130 trillion gallon Ashokan Reservoir allowed the rainbows to express their anadromous nature; the fish migrate to the larger body of water after their first year to grow and fatten on the baitfish that proliferate there, and return to their home stream during their spring spawning runs. 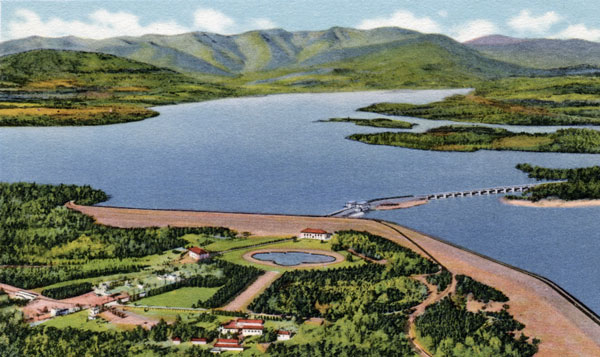 In 1926, the Schoharie Portal was completed, routing water from the Schoharie Valley into the Ashokan Reservoir system via the Esopus Creek. Entering the Esopus Creek at Allaben, the portal's contribution to the flow regimen of the Esopus effectively turns 12 miles in the middle third of the Esopus Creek, the stretch below the portal and above the reservoir, into a tailwater fishery, ensuring trout-friendly cold water releases during the hot summer months. The conditions created by the controlled portal releases complete the picture that the modern Esopus Fly fisher encounters today.

The combination of finely silted clay deposits left in the Esopus watershed by retreating glaciers, the increased frequency of disruptive weather events, and the various encroachments of modern society have all left the Esopus in an impaired state in recent years. Today's "old-timers" lament the decline of the Esopus trout fishery. But what's good for the thirsty people of New York is also good for the trout swimming in our Catskill rivers — abundant, clean, cool water. Today, active conservation groups like Trout Unlimited, the Catskill Heritage Alliance, the Ashokan Watershed Stream Management Program, and MountainKeeper are working hand-in-hand with the New York City Department of Environmental Protection and the New York State Department of Environmental Conservation to promote a healthy future for New York City's water supply, our native Catskill trout, and the rich traditions of Catskill fly fishing.

Reduced to fundamentals, fly-fishing is the art of catching fish by means of an artificial fly which suggests to the fish some form of insect life upon which it is accustomed to feed.
Preston Jennings, “A Book of Trout Flies,” 1935