A selection of the books, resources and memorabilia available at the Jerry Bartlett Collection.

The Jerry Bartlett Memorial Angling Collection was founded shortly after the death of Jerry Bartlett in 1995. A well-known fly fishing guide and staunch conservationist, Jerry was president of the Catskill Chapter of Trout Unlimited. With his wife Doris, he owned and operated the Two Brooks Fly Fishing School. As a guide and expert fisherman, Jerry was intimately familiar with stream life and developed detailed teaching guides on the major hatches of insects in Catskill streams, particularly the Esopus Creek. 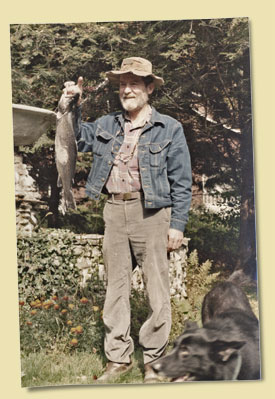 Occupying a cozy reading room on the second floor of the Phoenicia Library, the Collection's “Anglers' Parlor” opened on April 1, 1996 (opening day of the fishing season). Built by local carpenters, electricians and other volunteers in the style of a rustic cabin, the Parlor was filled with fishing lore, tackle, flies, historic artifacts, photos, memorabilia and a core collection of books, which grew to become the largest circulating collection of books on fishing in the Northeast.Unlike many other “special collections,” the Jerry Bartlett Angling Collection is open to all browsers, and anyone with a valid Mid-Hudson Library System universal borrowing card can take out a book.

Over the past two decades, the Anglers' Parlor has hosted fly tying classes, angling and stream-related workshops, oral history events, commemorations of famed local anglers and guides and book signings by local authors. A “lend-a-rod” program allows anyone with a library card to check out a rod. From its inception, the Bartlett Collection has actively reached out to children in the Phoenicia School with fly tying programs, casting lessons, stream walks, macro-invertebrate workshops and support for the Trout in the Classroom Program.

In March 2011, a devastating fire destroyed the Phoenicia Library, but the community rose to the challenge. Nearly four years later, in January 2015, the expanded, fully accessible, rebuilt library opened at 48 Main Street. Although all the books and rods were lost, the Angling Collection received generous donations of new rods and books and added two shadow boxes exhibiting the flies tied by Catskill Master Tyers for the hatch chart section of this website. Some furniture and framed photographs and artifacts were rescued and refinished, and a new braided rug added the finishing touch to the warm and welcoming environment.

As it enters its twentieth year, the rustic fishing camp called “The Angler's Parlor” is better than ever, thanks to the generosity and good will of our supporters near and far.

Every river has its own music, from the tumbling woodwinds and flutes of a Catskill brook in its scarred bed of glacier-smooth granite and polished boulders, to the serpentine beauty of a tinkling cutthroat creek in the wildflowers of some California meadow high above timberline.
Ernest Schweibert